Leeds Coalition Against the War

Leeds Coalition Against the War was formed as part of the national Stop the War Coalition in 2001 to oppose the government's so-called 'war on terror'. It stands against war, against racism and in defence of civil liberties.
Peace & Disarmament 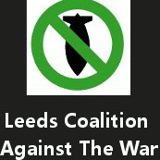 Leeds Coalition Against the War (LCAW) was founded as part of the national Stop the War Coalition in September 2001 in the weeks following 9/11, when George W. Bush announced the “war on terror”.  LCAW and Stop the War have since been dedicated to preventing and ending the wars in Afghanistan, Iraq, Libya, Syria and elsewhere.

Leeds Coalition Against the War opposes the British establishment’s disastrous addiction to war and its squandering of public resources on militarism. We have initiated many campaigns around these issues.

We are committed to supporting Palestinian rights, opposing racism and Islamophobia, and to the defence of civil liberties.

Stop the War has organised around 40 national demonstrations, including the largest protests ever held in Britain, most memorably on 15 February 2003, when up to two million gathered on London’s streets to oppose the Iraq war . In Leeds, LCAW organised mass demonstrations and protests, including an 8,000 strong march in Leeds and a march on the day the Iraq war began of 5,000 people in Leeds city centre.

In 2013, Stop the War was central in mobilising opposition to UK bombing of Syria, as proposed by David Cameron’s government. This led to the historic decision in parliament when MPs voted against military intervention.

Other events which Stop the War has organised are thousands of public meetings across the country, direct action in the run up to UK wars – including walkouts from schools, colleges and workplaces – two People’s Assemblies, international peace conferences, vigils, lobbies of Parliament and anti-war cultural events.

Individuals can become members of Leeds Coalition Against the War, and we welcome affiliations by supporting organisations and trade unions. Members and affiliates must support the aims of LCAW as set out in our constitution.

Tweets by LCAW1
Is this your group? Email our webmaster to request edits.

No upcoming events for Leeds Coalition Against the War.

By giving the Palestinian people a voice, by changing the false narrative of the Israeli…

Yorkshire Campaign for Nuclear Disarmament works for a world free from nuclear weapons. We oppose…

LUU Amnesty is the Leeds University branch of Amnesty International. We meet every Thursday, 6pm…

Gain an international perspective by exploring how nations interact on the global stage, what happens…

Leeds BDS (Boycott, Divestment and Sanctions) is a new group which has emerged from the…

Yorkshire Campaign for Nuclear Disarmament works for a world free from nuclear weapons. We oppose…

Our mission is to: – Raise awareness of the nature and magnitude of the US…

We aim to shine a light on the people, history, culture and society of Palestine….