We are a Hub for coordinating resistance against TTIP in the Leeds area. Keep your eyes peeled for information on action you can take part in!
Economic Justice and International Solidarity 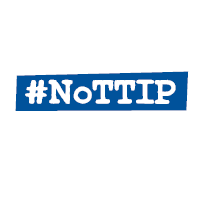 The Transatlantic Trade & Investment Partnership (or TTIP for short) is a so-called ‘free trade’ deal being negotiated by the EU and US. The deal will give big business more power over our society, environment, public services, and democracy.

Shamefully, the UK government is a major supporter of this deal, which would tighten the grip of big business over our society. TTIP could:

Leeds Against TTIP is a hub for coordinating action in Leeds against TTIP! So far we have organised the No TTIP trail on the 11th October Europe-wide day of action, which was a huge success and drummed up lots of awareness and lots of signatures for the European Citizens Initiative petition against TTIP, which now has over 1,000,000 signatures!

Is this your group? Email our webmaster to request edits.

No upcoming events for Leeds Against TTIP.

We are a movement of musicians, artists and community organisers, and we’re angry about the…

Leeds for Europe have been campaigning against Brexit since we were formed in January 2017. …

This is the Leeds local group called Ray of Hope. Ray of hope is a…

Leeds Oxfam Group has been in existence for over 10 years.  For a small number…

LUU Amnesty is the Leeds University branch of Amnesty International. We meet every Thursday, 6pm…

By giving the Palestinian people a voice, by changing the false narrative of the Israeli…

ACORN IS A COMMUNITY BASED UNION OF WORKING CLASS PEOPLE – TENANTS, WORKERS, RESIDENTS. We…

Following the independence of Zimbabwe in 1980, primary and secondary education flourished. However, there were…

We aim to increase women’s political participation and representation, and to promote our feminist agenda…

A series of talks and lectures inspired by Cafe Scientifique, who’s mission statement is to…

Global Justice Leeds used to be Leeds World Development Group. We focus on issues of…