Taking action to stop fracking and other unconventional gas exploration in Leeds and across the UK, as part of a movement to stop climate change and build a more sustainable future.
Ecological Justice and Energy 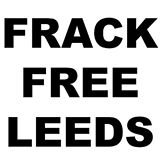 A new round of fracking licences have recently been announced across England, covering vast areas of Yorkshire. This means that fracking could soon be coming to our local communities.

Fracking, or hydraulic fracturing, is a process used to extract gas trapped inside shale rocks underground. This is done by drilling a deep well and injecting a mixture of water, sand and chemicals at very high pressure to fracture the shale rock and release the gas. Evidence from fracking sites in the US, Canada and Australia have shown a wide range of negative impacts this process causes, such as water contamination, air pollution, earthquakes, and ill health in humans, livestock and wildlife alike.

Community groups across the country have had great success in campaigning against fracking in their local area, you could be part of the community of people winning this battle all over the UK.

The areas of South Leeds covered by the latest round:

Most of the Wakefield area is also covered, including:

Is this your group? Email our webmaster to request edits.

Transition Meanwood is a community-led group who’s aim is to strengthen the local economy, reduce…

We are a community woodland group based in Yorkshire, and we aim to reconnect people…

Hollybush is an inspiration to many, but we need your help too.

Leeds Bradford Airport currently handles around 4,000,000 passengers each year. In the next few months, the owners…

We are a charity, educating for a just and sustainable world. Our mission is to…

This is not simply about investment. This is about unshackling the chains of poverty and unlocking…

The Human Aquarium is a project by Yorkshire Life Aquatic CIC. Started in 2018 to…